I was walking along the street one day, and a story flew into my mind, as stories do. I started to write it down. It’s told by a boy called Michael. He’s moved across town with his parents to an old house that needs to be renovated. Just as they move in, Michael’s baby sister is born. She is premature, and she’s seriously ill. Michael is fed up and frightened. At the bottom of the garden, there’s a tumbledown garage. Michael is told not to go into it. It’s far too dangerous. Of course, he goes in there. And, behind heaps of junk and ancient tea chests, he discovers a wizened man or creature who seems to be on the point of death. 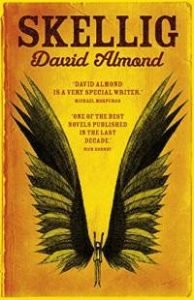 The story almost seemed to write itself. The words were writing me. I could see that it drew on my own childhood, my own life. I lost a baby sister when I was a boy. My mother had terrible arthritis, just as the creature has. It is set in the house in which I lived, in Heaton in Newcastle. The garage at the house was just the same as the garage in the story. But the story had a drive of its own. It was a mystery, even to me. I had to explore just as the characters explored. The story grew. Michael discovers a new friend, the bird-loving, school-hating imaginative Mina. I didn’t plan for Mina to appear, but for me, she is the most important character in the tale. The story kept on growing, coming to life. I didn’t really plan any of it. I never knew quite what would happen next, or how it would end. The book took me six months to write. It was my first book for young people. It was taken by the first publisher that read it, the wonderful Hodder Children’s Books. It won The Carnegie Medal and The Whitbread Children’s Book of the Year. It has been published in forty languages. I rewrote it as a play, that was directed by Sir Trevor Nunn at The Young Vic. A second major production of the play was created by Birmingham Stage Company. This production, directed by Phil Clark, had three UK tours and appeared on Broadway at the New Victory Theatre on 42nd St. I adapted it as a radio play for BBC Radio 4. I wrote the libretto for an opera composed by Tod Machover and performed at The Sage Gateshead. It became a film starring Tim Roth as Skellig. The book came out in 1998, so it is almost twenty years old. It continues to be read all around the world. It is used in many schools. The play continues to be performed on many stages.

The story reaches out to many people of all ages and nationalities. It’s probably the most loved and the most discussed of my books. I receive many letters about it. Some people have told me the most personal and difficult things about themselves and their families after reading it. I am asked many questions about it. But there is much about the story that I don’t understand. How, for instance, did Skellig come to be in the garage? Where does he go at the end? What is he? Why does the story seem to touch so many hearts? I don’t have the answers. But isn’t that the way with many things in this mysterious world of ours?

“Touched with a visionary intensity, this strange, hugely readable and life-affirming tale exercises every muscle of the imagination.”