I knew, when I was young, that I wanted to write. I loved stories. I loved books. I’d go to our local library and dream that my books would stand on its shelves one day. But how could that be possible? The things that I loved were so intimidating. Their apparent perfection scared me stiff: all those words in perfect order, all those neat lines of print, those perfectly-printed pages. My work looked nothing like that. My messy mind looked nothing like that. How could anyone create such a thing? Maybe writers had special kinds of minds. Maybe the insides of writers’ minds looked like the insides of their books.

But of course, for we human beings, there’s no such thing as perfection. We’re imperfect beings in an imperfect world and our imperfection is at the heart of creativity. Our minds are messy, crowded with memories, images, sensations, fleeting thoughts, fragments of tales and dreams, weird speculations, devils and angels, hopes and fears. Much of the mind blazes with light. Much of it is vague and shadowy. Much of it is pitch-black and unknown. The mind is fragile, like the body is, but it is also one of the most powerful things in the known universe. The mind creates our world, our civilisation. And each of us has one of these astonishing, imperfect, beautiful things. 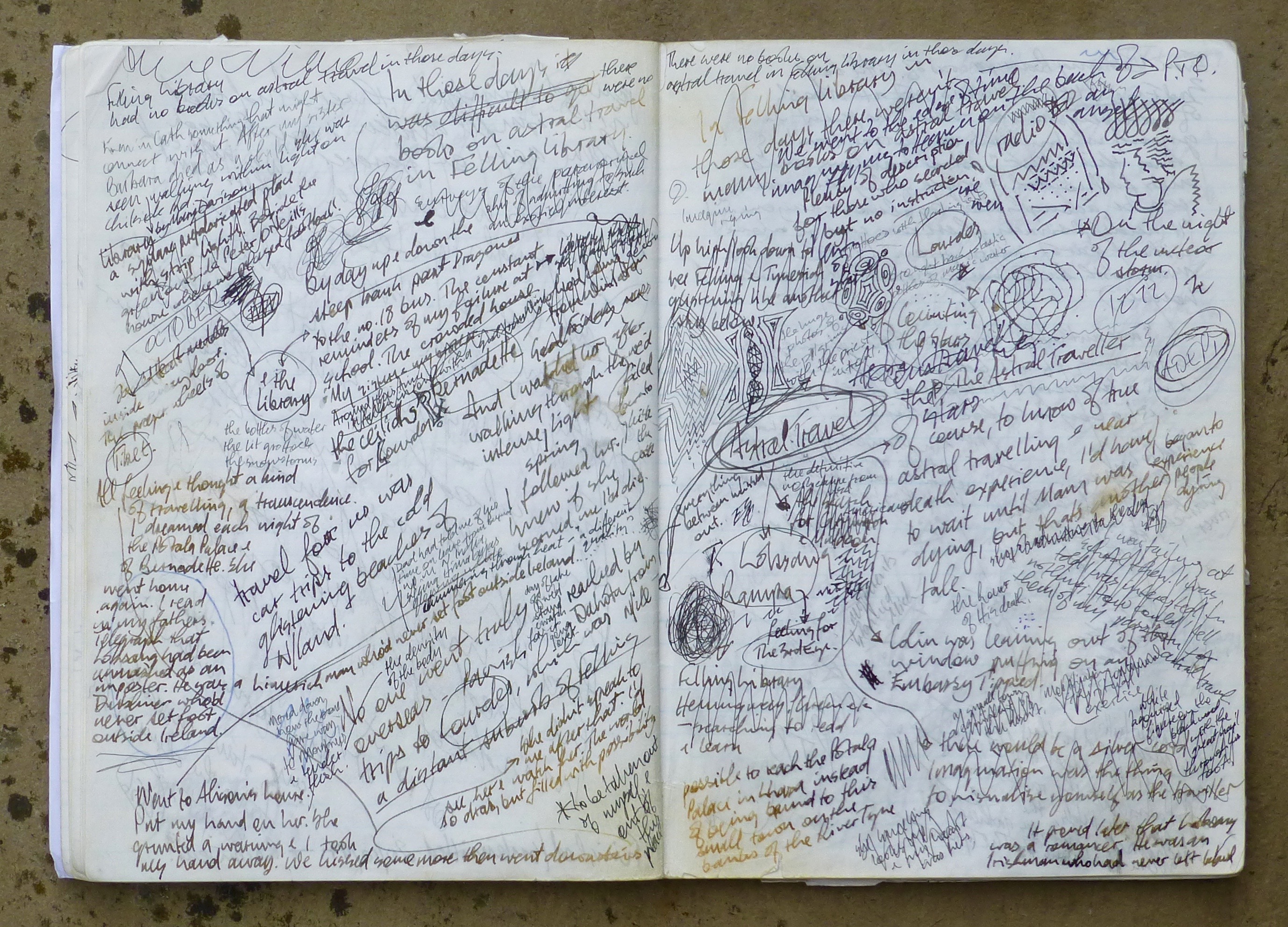 For me, the creative process has to be imperfect, messy, playful, often childlike, often weird. I can’t plot or to plan too closely. When I start a new story, I usually have a few notions or images. Sometimes I have a powerful central idea, a character who demands attention, a scene that cries out to be created on the page. But even then, I’m often not quite sure what I’m doing or why I’m doing it. I set off like an explorer, in the hope that I might discover a story that’s powerful and new. 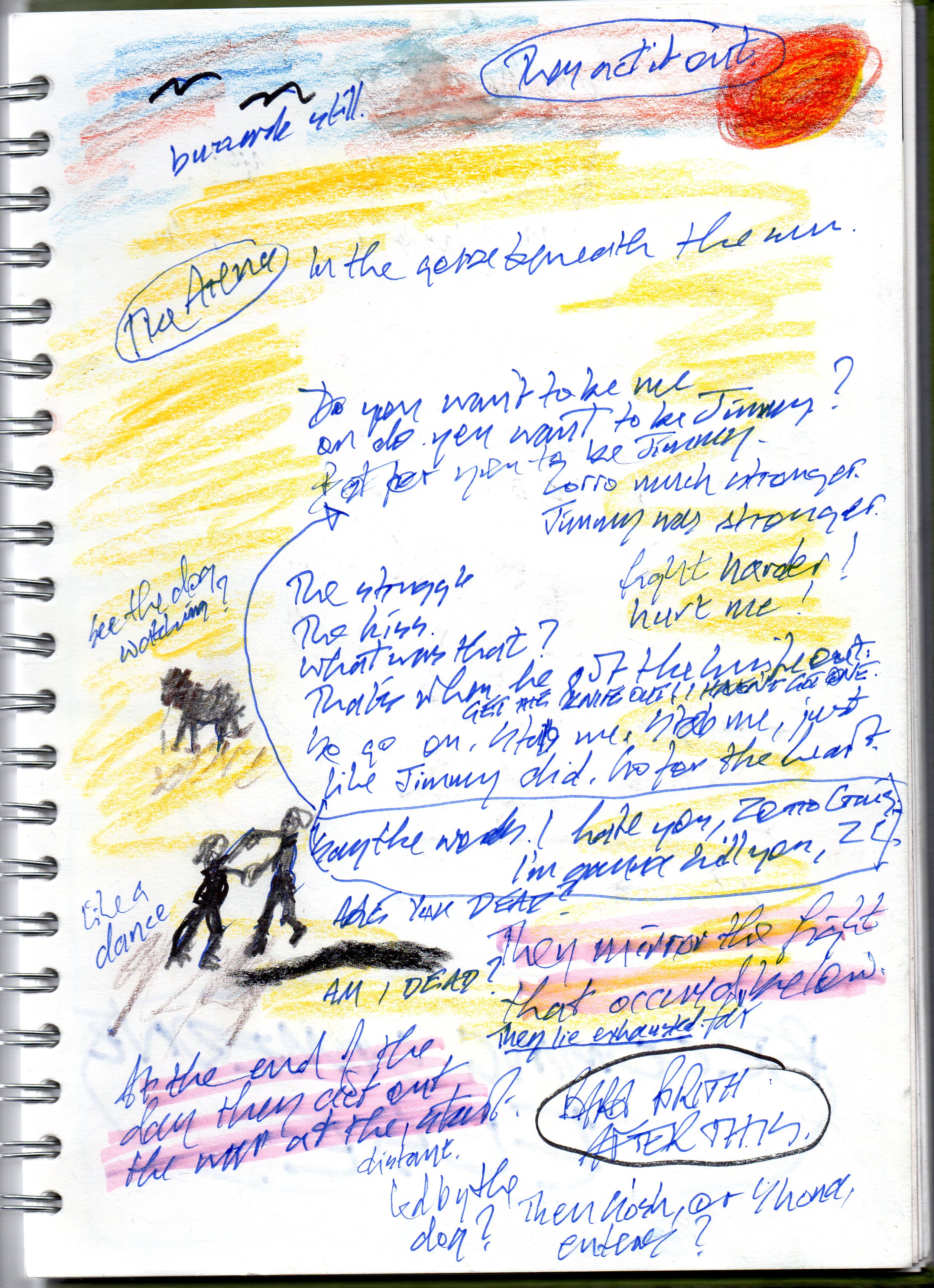 Notebook: The Colour of the Sun

I use notebooks, sketchbooks, pens, pencils, coloured pencils. I scribble and doodle, experiment and play. I allow words and images to flow from my hand onto the page and I’m often amazed by what appears there. I love my computer, too. At the same time as scribbling, I start to compose sentences, paragraphs, pages. I create a title page with the name of the book (even though I know the title will probably change) and the name of the author (me!). I establish a daily routine and keep a tally of the number of words I write. I print out the pages and hold them together with bulldog clips so that I can see the pages growing and accumulating. I try not to force the story to take a particular shape. I let it grow like an organic thing. I search for the tone of the story, the voice in which it has to be told. I keep on scribbling and composing. I write and rewrite. I throw away and throw away. I read the story aloud to myself to test its rhythm and flow.

Often I’m filled with anxiety and self-doubt: everything I write is stupid; why did I ever start this terrible book; why aren’t I writing another book? Why did I ever think of becoming a writer at all? At times like that, I just have to grit my teeth and carry on, even though I’m sure I’m writing rubbish. I try to relax. I play with my notebooks and pencils and allow new possibilities to emerge on the page. Sometimes there are moments when I suddenly see what’s going on and how I can move the story forward. There are marvellous moments of grace when I, the writer, disappear and the words flow like the notes of a song and the story seems to write itself. 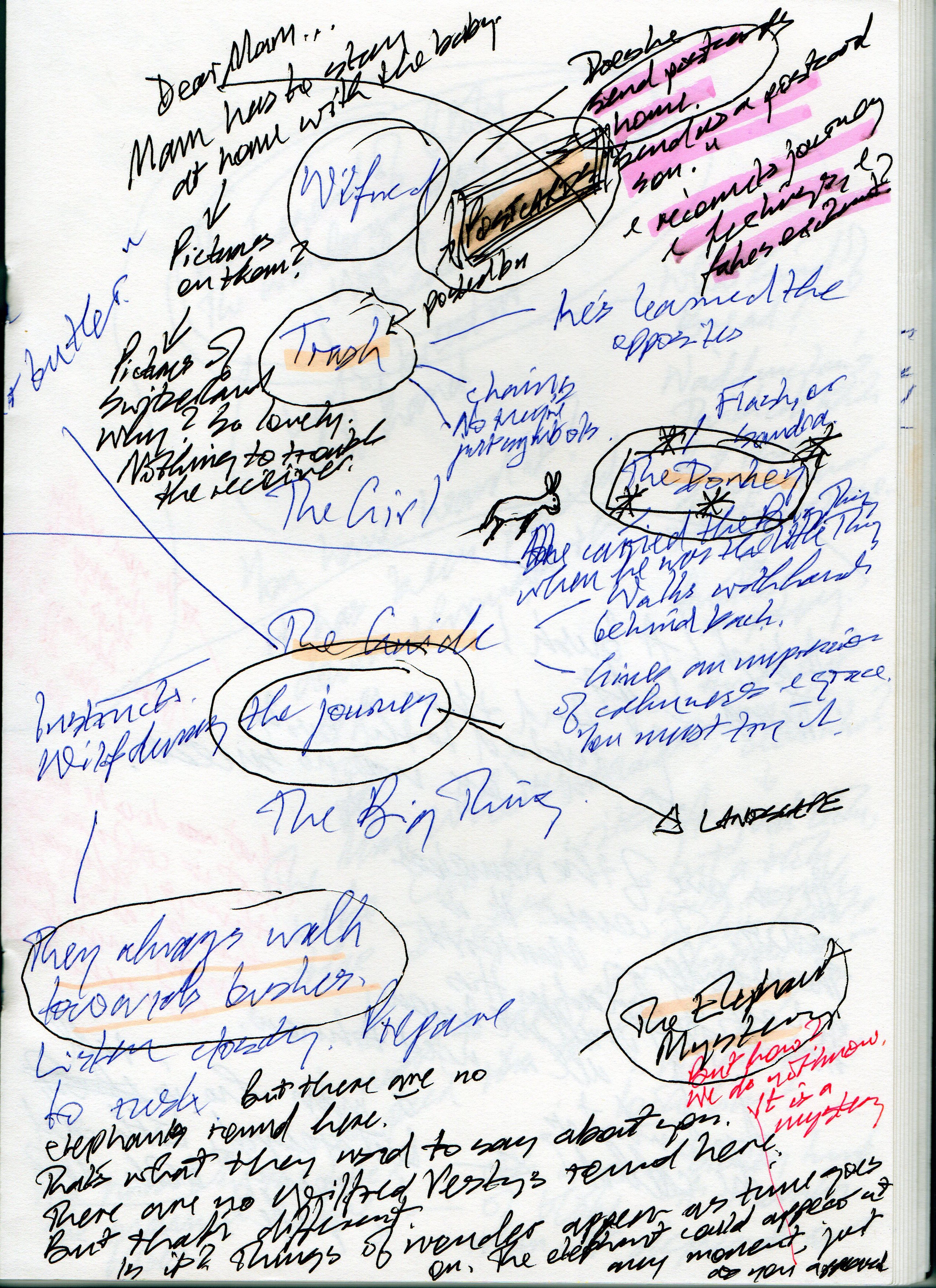 Notes for an unwritten story

I start to get a sense of the overall shape and I see what kind of book this might be. I begin to understand some of the connections that hold it all together. I cut and reshape. I get rid of characters who once seemed essential but who now get in the way. Sometimes I change the tense in which the book is written. I change from third person to first and back to third again. I slash and burn. I keep on writing, scribbling, rewriting, rewriting. I get the glimmerings of an ending but I don’t rush towards it. I let the story continue to flow and to grow. I take great pains to try to make every word earn its place. I try to create a book, even when it is tinged with darkness and danger, that is a thing of beauty. I try to reach out to my unknown readers, to somehow cast a spell over them, to draw them into the story’s fold.

In the end, there it is, that apparently impossible thing: a beautifully-bound book; words that appear to be in perfect order; neat lines of print; perfectly-organised pages. It looks fixed, static. It looks as if it couldn’t exist in any other way. That’s an illusion. The story continues to move and grow and to take on new dimensions in the minds of its readers, It is recreated there, and stimulates new tales, new memories, new dreams. It has my name on the cover, which might suggest that I know everything about it, but I don’t. The book has its own life now, and I’m in the process of trying to create another.

The making of a book involves hard work, playfulness, dreaming, willpower and madness. Sometimes I’ve written a short book in a few weeks. A novel will take a year or more. The whole process can be excruciating and exhausting, but it’s also a thing of great beauty. To create and to pass on a story is a fundamental, human act. We’ve been sharing stories with each other since the beginning of human time. We’ll be sharing them until the end.