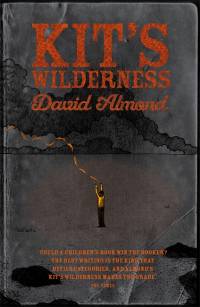 In Stoneygate there was a wilderness, an empty space where the coal pit had once been. There, Kit met Askew, with his wild dog Jax. Askew, who ran the game called Death …

Kit has just moved to Stoneygate with his family, to live with his ageing grandfather who is gradually succumbing to Alzheimer’s Disease. Stoneygate is an insular place, scarred by its mining history – by the danger and death it has brought them. Where the coal mine used to be there is now a wilderness.

Here Kit meets Askew, a surly and threatening figure who masterminds the game called Death, a frightening ritual of hypnotism; and Kit makes friends with Allie, the clever school troublemaker.

As Kit struggles to adjust to his new life and the gradual failing of his beloved grandfather, these two friendships pull him towards a terrifying resolution. Haunted by ghosts of the past, Kit must confront death and – ultimately – life.

"Almond’s masterpiece: Kit’s Wilderness is one of those rare works that changes how we see the world" — The Guardian

"Could a children’s book win the Booker? The best writing is the kind that defies categories, and Almond’s Kit’s Wilderness makes the grade." — The Times

Kit’s Wilderness won the 1999 Smarties Prize in the UK, and the 2001 Michael L Printz Award in the US.