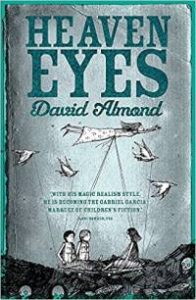 Erin, January and Mouse live in a children’s home, Whitegates. They often dream of escape, and frequently journey into the outside world. Running away is something they know all about.

But this time January builds a raft, and the three of them head precariously down river. Towards the Black Middens. This time they might never come back.

When they stumble across a disused factory and its strange inhabitants – Grampa and Heaven Eyes – they wonder if they’ll even have the choice.

Heaven Eyes is the girl who should have drowned at sea. The mysterious girl desperately searching for her family, hoping that these three might be the family she has lost. She has a secret history only Grampa knows. And does he trust these three invaders enough to tell them?

Whatever happens, all three have a part to play…

Heaven Eyes is published by Hodder Children’s Books; it is also available in an audio edition, read by Imogen Stubbs.