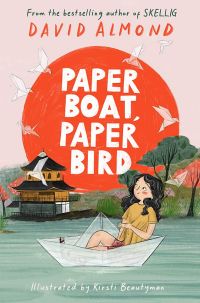 A stunning new story from the bestselling, prize-winning David Almond, unfolding the magic of the everyday. Mina, from the unforgettable Skellig and My Name is Mina, journeys to Japan and discovers the wonders of the world around her.

Kyoto, Japan. Mina is on a bus. Everything is strange and beautiful.

Mina watches as a woman folds a piece of paper into an origami boat, then floats it over to her.

As Mina discovers the magic of origami, her eyes are opened to the wonders of the real city around her.

Unfold the magic of the everyday, on a journey with one of the world’s best-loved authors – with stunning illustrations from Kirsti Beautyman in black and orange throughout.

David says: "Mina always seems very real to me, and is a powerful force in my imagination. I’ve been several times to Japan, and have felt weirdly at home there. The book includes an afterword exploring where the story came from. It’s beautifully illustrated by Kirsti Beautyman. 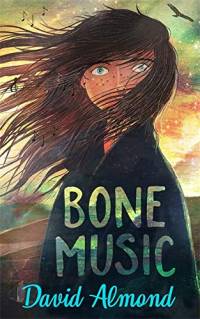 This wonderful tale transports the reader from the city to the forests and fells of Northern England. Under a boundless starry sky, the unforgettable Sylvia Carr reconnects with the ancient past and discovers what it really means to be young in the world today.

Sylvia, bravehearted and rebellious, moves into wild Northumberland from the city of Newcastle. She feels alien in this huge, silent, seemingly empty landscape, but then she meets Gabriel, a strange yet familiar boy. As they roam the forests and fields together, she sees nature with new eyes. She becomes aware that the past is all around her, and is deep inside herself. From the wing of a dead buzzard, they create a hollow bone – the kind of flute that was created and used in rituals in the distant past. Alone and over the course of one magical night, Sylvia plays the bone and encounters her ancient self, and is reconnected with the prehistoric world. She is rewilded, turned into a more vivid version of herself. She returns to the city ready to face the opportunities and challenges of the modern world.

This is a book of hope and joy – a book that celebrates humanity and explores the deep connections between ourselves and nature. It is timely and original. it speaks to young people in about what it really is to be a human being alive today.

Bone Music has been nominated for the CILIP Carnegie Award 2022. 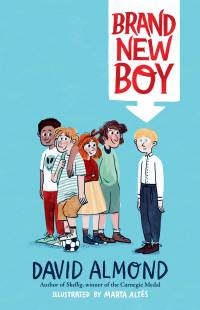 A charming, warm and witty tale from a master storyteller, winner of the prestigious Hans Christian Andersen Award and author of the Carnegie Medal-winning Skellig.

"Weird? Yes, I suppose so. But you kids are all a bit weird if you ask me. And to tell the truth, it’d be weird if you weren’’."

When a new boy joins the class, everyone thinks he’s a bit strange, but he’s brilliant at football and loves crisps, and that’’s all that matters to Dan and Maxie.

But the truth about George is stranger than anyone could have imagined … and more sinister, too.

Can his new pals help him to become truly free?

Annie Lumsden, The Girl from the Sea 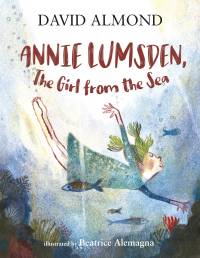 A magical story about finding your identity from one of the most acclaimed storytellers of his generation, richly illustrated in full colour by an internationally renowned artist.

Annie has never been like the other girls. Her mam tried sending her to school when she was small, but Annie couldn’t seem to make words or numbers stick. She prefers instead to be swimming in the sea, or sunbathing on the shore at Stupor Beach, her head full of tales. She should have been a fish, her mam always tells her, and Annie knows the truth of it. Then a stranger who comes to town is struck by the beauty and the wonder of her, and Annie Lumsden realizes that perhaps she really is half a creature from the sea.

Annie Lumsden, The Girl from the Sea is illustrated by Beatrice Alemagna. It was published by Walker Books on 6th August 2020.